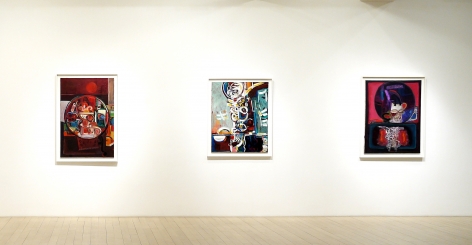 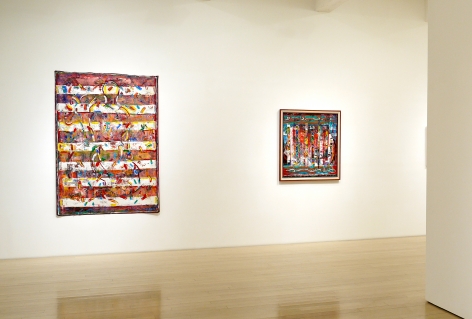 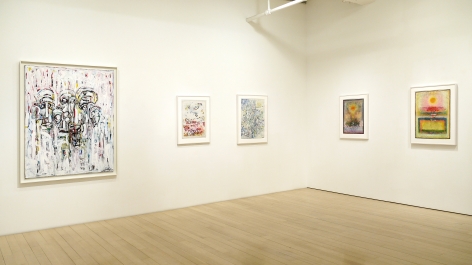 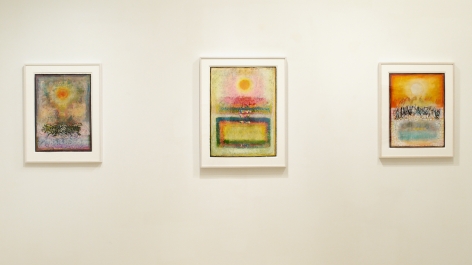 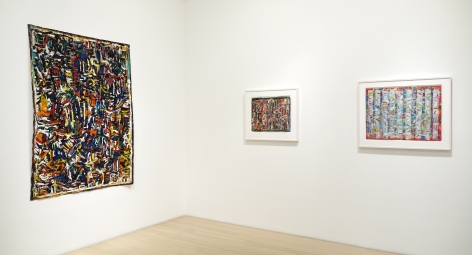 DC Moore Gallery is proud to present David Driskell: Resonance, Paintings 1965-2002. Driskell, soon to be 88, is a legendary African American artist and art historian. As an artist, scholar, and curator, he has made substantial contributions to these fields that have changed the way we think about American art. His paintings and collages unite a strong modernist impulse with his personal vision and memory. Marked by the artist’s abiding color sensibilities, his work bears the imprint of a turbulent era, a return to nature, and Driskell’s synthesis of the European, American, and African art forms he knew firsthand.

The years between the March on Washington in 1963 and the end of the Vietnam War in 1973, galvanized by the Civil Rights Movement and often called the “turbulent decade,” represent a lived experience for Driskell. Many of Driskell’s works of the late 1960s through the 1970s clearly reflect the era of the Black Arts Movement and the Afrocentric impulses it advanced. But they are first and foremost individualized, personal responses by an artist of the era, not one constrained by it. In 1966, James Porter described Driskell’s aesthetic responses as having the effect “of prayer and of emotional release instead of despair,” noting that, “such paintings are directional signals to action for those who…understand their symbolic language.” Equally important to his iconography were the first trips taken to the African continent, between 1969 and 1972. Driskell returned with a deep appreciation and respect for African artistic traditions and iconography which began appearing in his work “as sites of memory rather than intrinsic forms,” as art historian Julie McGee has noted. Driskell absorbs, distills, and recycles iconic African art forms into honorific personal visions – flattened, decorated, and resurfaced in his signature style, color and calligraphy. Yoruba Forms #5 (1969) exemplifies this response: an iconic, Christ-like figure, framed by a celestial orb, is universal and particular in its meaning. The conceptualization recalls Driskell’s Behold Thy Son (1965, Collection of the National Museum of African American History and Culture), a tribute to Emmett Till, and Black Crucifixion (1964). A commanding image Shango (1972) reimagines a Yoruba ritual object, a carved dance wand (oshe shango) as a medieval or byzantine period icon, syncretic in meaning as well as form.

While works with overt protest are rare in Driskell’s oeuvre, he found compelling reasons to initiate several works of sociopolitical commentary during the late 1960s and early 1970s. Important compositions in this vein include Ghetto Wall #2 (1970). Driskell imagines a painting-within-a-painting: a mural that covers an inner-city brick wall, a distinctly American phenomenon that arose with the Civil Rights movement, as a community effort to counter blight in stressed neighborhoods. The form of the X appears, a mark symbolic in this work of Civil Rights leader Malcolm X, as Driskell himself has noted. He also alludes to the American flag, its stripes appearing in two places on the canvas, and which also prefigure the African ribbon forms he would soon incorporate into other works.

The Black Arts Movement fostered a powerful trajectory toward Afrocentric subject matter in American art at the time. Not all artists followed this stream, but it was one Driskell found absorbing. During his years teaching at Fisk University, expressive Blackness was in vogue, and Driskell was fully at home in this arena, using African and African American themes seamlessly and often syncretically. He shared with Romare Bearden, whom he invited to Fisk in 1973, a mutual devotion to an iconography that was expressive of Black culture and fundamentally classic, as timeless and reusable as any within the art historical canon. Both artists created distinctive iconographies that drew upon African and American history, myth, and experience. Collage paintings by Driskell such as Jazz Singer (Lady of Leisure, Fox), from a 1970s series centered on Black womanhood, expand the representational scope of American art.

Driskell was influenced by natural landscapes as well as urban landscapes. It was in 1980 that Driskell completed a Yaddo residency which was particularly regenerative as it afforded him a chance to now harness the expressive, enduring spirituality that could be found in abstraction. These later works reveal Driskell’s longtime affinity to textured collage elements and calligraphic mark making. Now, through layered cloth or torn paper strips and vibrant colors, he conveys multiple cultural and natural allusions, such as Bahian masking traditions. Bahian performers wear layers of colored cloth strips to convey prestige, wealth, and power as they dramatically oscillate along with the dancer’s dramatic movements. The bold, frenetic brushwork and dynamic color in Bahian Ribbons (1987) is a prime example of his later work echoing that tradition. The cloth strips are also meant to emulate the verticality of trees, which he views as symbols of shared histories. In the artist’s words, “Trees by their very nature connect past with present and bear witness to multiple histories and generations.” While the works appear as an aesthetic departure from earlier pieces, they are rather a reinvigoration of his established use of color, pattern, design, and collage, while maintaining his love of nature and African iconography.

Through the 1980s to the present, Driskell’s paintings and collages continued to move increasingly towards abstraction and a personal synthesis of place, memory, and spirit, incorporating his many interests including nature, music, and spirituality. The surfaces of these multi-layered works are heavily tactile with expressive mark making, pattern, and vibrant color. Two of the largest works in this exhibition, Linear Waves (1989) and In Search of My Mother’s Art II (1992), use abstract forms and markings to conjure up deep respect for his mother’s work with cloth, quilts, and sewing.

Born in 1931 in Eatonton, Georgia, Driskell received his BA in Fine Art from Howard University and MFA from Catholic University, both in Washington, D.C. He attended Skowhegan School of Painting and Sculpture in Skowhegan, Maine in 1953, and has retained a lifelong relationship with the school, serving as visiting faculty, lecturer, and board member. His pioneering scholarship underpins the current field of African American art history. In 1977, after having taught at Howard and Fisk Universities, Driskell joined the Department of Art at the University of Maryland where he remained until his retirement in 1998.

His numerous awards and honors include the prestigious National Humanities Medal in 2000. The University of Maryland opened The David C. Driskell Center for the Study of the Visual Arts and Culture of African Americans and the African Diaspora in 2001 to celebrate his legacy as an artist and art historian. In 2005, the High Museum, in Atlanta, established an annual award in his honor, The David C. Driskell Prize, given to an African American artist or scholar. In 2016, the artist received the Skowhegan Lifetime Legacy Award. His work can be found in many museum collections including The National Gallery of Art, Washington, DC; High Museum of Art, Atlanta; The Yale University Art Gallery, New Haven; The Hood Museum of Art at Dartmouth College, NH; Colby College Museum of Art, ME; The Portland Museum of Art, ME; and The Smithsonian Museum of African American History and Culture, Washington D.C.

Driskell lives and works in Hyattsville, Maryland and Falmouth, Maine.