DC Moore Gallery is pleased to present Janet Fish’s most recent work. Drawing from the tradition of still life painting, Fish defies its connotations by engaging primarily with the movement of paint. Her paintings radiate with bold color and light, and her gestural brushstrokes guide the eye through transparent surfaces and across intricate patterns in paint. A catalogue with an essay by Lilly Wei will be available.

Fish sometimes spends days meticulously arranging her compositions with objects that often connote particular seasons or activities. The specific objects chosen, however, do not create the content of the work. Fish utilizes colored glassware, crystal tchotchkes, patterned textiles, and vibrant floral bouquets merely as a surface for her energetic exploration of the properties of paint. “The real structure of a painting comes from the movement of color over the surface,” Fish has said. Indeed, the wild and mesmerizing motion of her colored lines combined with commonplace decorative items produces what artist and critic Robert Berlind has called a “hallucinatory experience of the everyday.”

Fish attributes her fascination with light and color to her childhood spent in Bermuda. Her grandfather was the American Impressionist painter Clark Voorhees, and her mother was a sculptor. Fish attended Smith College and earned her Master’s Degree in Fine Art from Yale University in 1963, when art school faculties taught Abstract Expressionism. Fish notes that she absorbed those artists’ interest in gesture and matters of form, but she independently gravitated toward figuration. Fish lives in New York City and Vermont. 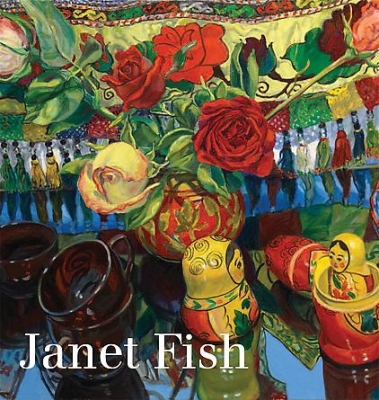