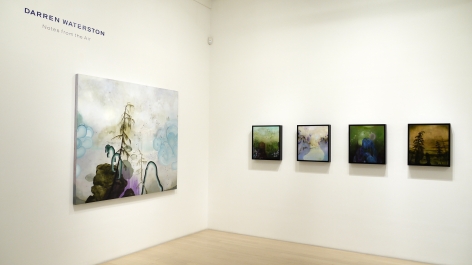 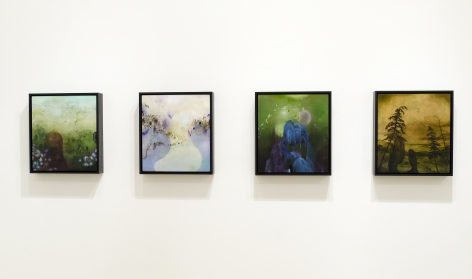 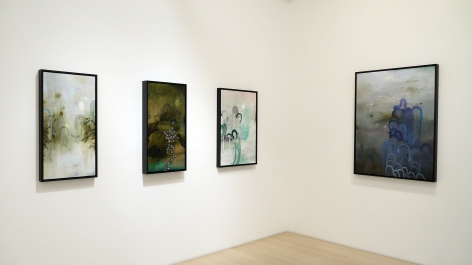 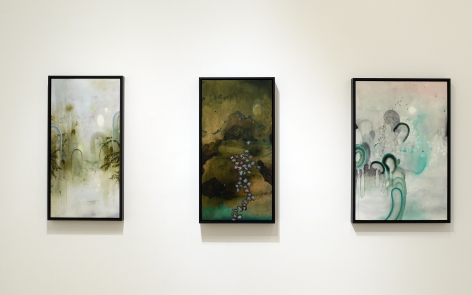 DC Moore Gallery is pleased to present Darren Waterston: Notes from the Air, featuring all-new paintings by Darren Waterston. The exhibition title is taken from a volume of selected late poems by John Ashbery, whose themes of nature, wonder, and experience continue to be an important influence on Waterston’s work.

Waterston’s paintings are a continuation of his uniquely descriptive approach to expressing states of consciousness, using the landscape as metaphor and poetic space. The works depict otherworldly environments - nature as a heady fever-dream, destabilized, and teeming with quiet activity. They are alluring and on the threshold of the recognizable and the fantastical.

Waterston asserts the ever-present Surrealist impulse, having looked closely at the work of Hercules Segers, Max Ernst, and Odilon Redon while developing these paintings last winter. He remarks of his process:

“I often start out constructing a painterly description of space and spatiality, which may include sky, clouds, rocky cliffs, a verdant glade, but with every descriptive execution there is always the counterpart of abstraction and playful distortion of what is being depicted. I love the interchange between the beautiful and the monstrous.” -DW

This sublimity is further underscored by shifting perspectives, geological, voluptuous forms morphing diaphanously, and fluid layers of deep, saturated color. Waterston is especially interested in exploring how a profound sense of vastness can be achieved and expressed in smaller scale panels, on view for this exhibit.

Viewing Room for Darren Waterston: Notes from the Air