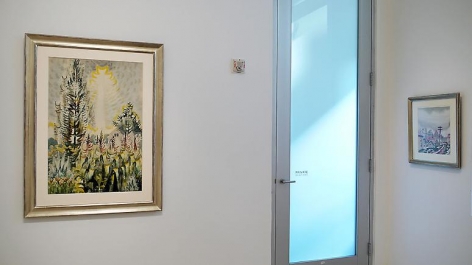 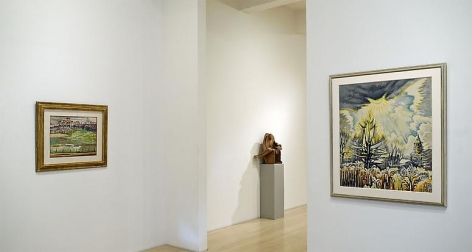 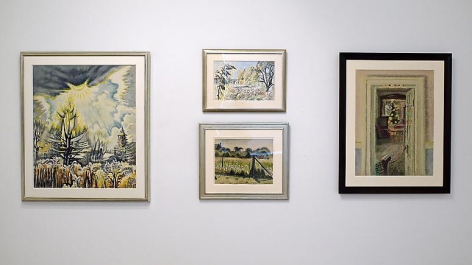 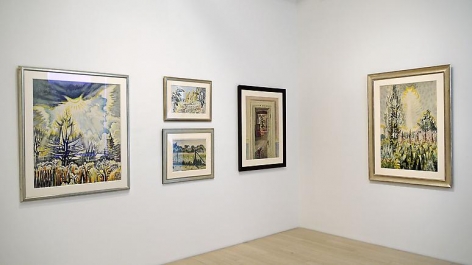 One of the most original artists of the twentieth century, Charles Burchfield (1893-1967), is featured in DC Moore’s project space. Burchfield’s intensely personal, often spiritualized, engagement with landscape is evident in the choice selection of watercolors in this focused exhibition.

“I feel impelled to embrace the earth,” he wrote in his journals in 1932. On another day spent in the woods and fields, he found that, “My spirit was in complete harmony with the world of nature and absorbed every sight and sound with a completeness that has not been my lot for many a month.” Burchfield’s more expressive paintings, primarily done at the beginning and then again during final period of his long career, reveal two complementary sides of his artistic personality – from exuberant views of energized, sunlit fields and atmospheric skies to more introspective meditations on the profound depths of nature.

Among his earliest watercolors are modernist views of his hometown of Salem, Ohio, and the surrounding countryside. While a student at the Cleveland School of Art from 1912-16, Burchfield was introduced to major trends in European and American modernism, as well as Chinese and Japanese art, and contemporary design theory. His work before around 1920 often shows his strong interest in boldly imaginative landscapes and a personal visual language of fantasy.

After spending much of the 1920s and 1930s working in a realist mode, Burchfield returned to a more active and expressive approach in the early 1940s. He was initially inspired to develop what he called “reconstructions” or “two-period pictures,” composites of smaller, early works, mainly from 1917 and 1918, which he enlarged with strips of paper to create grander, more complex compositions.

One of his finest reconstructions is In the Deep Woods (1918/1956), a large-scale work that blends observation, fantasy, and a lifetime of experience. Exceptionally rich in detail, the painting is layered with an abundance of growth. Flowers and ferns share the foreground with the trunks of two dead trees, suggesting an ongoing cycle of death and rebirth. Further back, beyond a dark stream or pool, a mysterious glow emanates from the depths of the woods. A lyrical, almost mystical excursion into the heart of a dense forest, In the Deep Woods epitomizes his more introspective work.By way of comparison, a watercolor done a few years later embodies the strongly expressionist, increasingly abstracted visions of the landscape around Buffalo, New York, that Burchfield was painting at the time. In Drought, Sun and Corn (1961-62), a tall tree rises at left with stylized branches arching upward into a sky charged with atmospheric intensity. Bold yellow forces lines heighten the sense of a dramatic surge of energy on a sun-drenched afternoon of a hot, dry summer day.Taken together, these works show the breadth of Burchfield’s artistic vision. A keen observer, he found evidence of the divine in the natural world, and the universal in the particular. He felt strongly that his identity was bound up with his relation to nature, and, in many essential ways, his empathy with his environment defined both his life and his art.DC Moore Gallery is the exclusive representative of The Charles E. Burchfield Foundation.