From the Institution's Press Release:

Jacob Lawrence: The American Struggle questions the stories we’ve been told by amplifying narratives that have been systematically overlooked from America’s history. This exhibition reunites Lawrence’s revolutionary 30-panel series Struggle: From the History of the American People (1954–56) for the first time since 1958, and SAM will be its only West Coast venue. These modernist paintings chronicle pivotal moments from the American Revolution through to westward expansion and feature Black, female, and Native protagonists as well as the founders of the United States. Lawrence interprets the democratic debates that defined the early nation and echoed into the civil rights movements during which he was painting the Struggle series. Works by contemporary artists Derrick Adams, Bethany Collins, and Hank Willis Thomas engage themes of democracy, justice, truth, and the politics of inclusion to show that the struggle for expansive representation in America continues.

The individuals who populate Lawrence’s compositions are given voice through quotations and excerpts from his thorough research developing the Struggle series. The title of the panels are key to understanding how Lawrence has envisioned a more all-embracing American history. Whereas Lawrence quotes a letter from Thomas Jefferson from a letter to Meriwether Lewis and William Clark as the title to Panel 18, he places their Shoshone translator and guide Sacajawea and her brother, Shoshone Chief Cameahwait, at the center of the composition. His use of a statement from George Washington’s aide-de-camp Tench Tilghman as the title of Panel 10, like the painting itself, shifts focus away from Washington in the crossing of the Delaware River, and onto the unsung heroes of the Revolutionary War. The descriptive title of Panel 12 prompts a closer look at its central figure, Margaret Cochran Corbin, the first woman buried with full military honors at West Point.

Within the exhibition, you will also see artwork from today’s youth addressing the ongoing American struggle. Selected by SAM’s Teen Arts Group from an open call for submission, these works consider the themes of Lawrence’s 30-panel series and respond to the prompt: “What do you imagine the 31st panel of the Struggle Series would depict today?”

One of the greatest narrative artists of the 20th century, Lawrence’s complex compositions and contextual titles center perspectives that are often noted in the margins of America’s beginnings. Lawrence spent two years painting the Struggle series. Between 1954 and 1956, America was reckoning with many of its contradictions. These 30 panels are heavily informed by the contemporary issues of Lawrence’s time as they address the history of what it means to be an American. Viewing this rarely exhibited series today is a reminder of shared histories during this current divisive chapter in America, where the struggle for freedom and justice marches on.

This exhibition was organized by Peabody Essex Museum, Salem, Massachusetts. 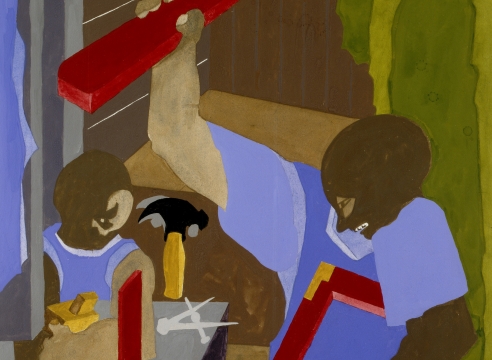