DC Moore is pleased to present Mary Frank: ¿Or Was it Like This? an exhibition of new paintings by Mary Frank. The exhibition is Frank’s tenth solo show with the gallery and explores her decisive return to painting after a primary focus in photography over the last decade.

¿Or Was it Like This? includes a series of mixed media paintings, sculptural painted stones, and drawings. The exhibition’s title is borrowed from a passage in Maxine Hong Kingston’s collection of nonfiction stories, China Men, in which the author invokes her own versions of her father’s memories. While discussing the horrors faced by Chinese refugees, the author reflectively questions herself at one point, “or was it like this?” Mary’s painting of the same name, but not the same subject, presents a tumultuous composition of human and animal beings in a painterly orbit that is a vortex of both creation and destruction. The swirling, gestural brushstrokes and torn black velvet paper conjure natural phenomena like cyclones, lava flows, tornados, sandstorms, raging infernos and supernovae. A storm of brilliant color and expressionistic paint ensnares the inhabitants of this enigmatic landscape of the past and the future.

In the book, Pilgrimage: Photographs by Mary Frank, John Yau writes of the artist, “she looks at the world without blinking or turning away, and to be her readers we must follow her, wherever she takes us, as well as reflect upon what she is telling us, in images as sharp as the stones she has gathered, and as tender as the hands that collected them.”[1] Mary’s evocative artistic practice and ever-present commitment to elemental materials manifest in her use of slate-like Bluestone. Mary draws and paints directly onto these stones, found near her home in the Catskills, creating a collage of natural found-objects on her layered paintings.

Embedded in Mary’s work is a passionate cry of frustration amidst the epic challenges facing human beings, the climate, and the earth as a whole. Mary questions humanity’s connection to its only home with renewed urgency. In her life as both an activist and artist, Mary strives to bring awareness to the causes she supports, including the organization Solar Cookers International, which teaches families to cook with free, no-emission solar energy. It is for this reason that Mary is dedicating ¿Or Was It Like This? to Greta Thunberg, the Swedish teenager who has galvanized a worldwide movement supporting climate action.

Born in England in 1933, Mary Frank grew up in a creatively-minded household; her mother was a painter and her father wrote about music, poetry, and art. Fleeing the bombings of London during World War II, Mary and her mother escaped to Brooklyn in 1940. During her school years, Mary studied a wide range of disciplines, including art, but dance was her first love. While still in high school, Mary studied modern dance with Martha Graham and José Limon. In 1950, she studied drawing briefly with Max Beckmann in Harlem and later studied life-drawing with Hans Hofmann. Mary first came to prominence as a sculptor in the 1950s, working in wood and clay. An example of Mary’s life-size figural clay sculpture, Swimmer (1978), can be seen at the Whitney Museum’s current group exhibition, Making Knowing: 1950 – 2019. Also, at the Brooklyn Museum, two of Mary’s sculptures, from different periods of her career, will be on view in Out of Place: A Feminist Look at the Collection, opening January 24.

In 2017, a solo exhibition at DC Moore Gallery coincided with the publication of the monograph, Pilgrimage: Photographs by Mary Frank, by the Eakins Press Foundation with texts by the poet and critic John Yau, and environmental activist and author, Terry Tempest Williams. Mary has been the subject of numerous solo museum and gallery exhibitions, including the exhibition Mary Frank: Finding My Way Home, which originated at the Asheville Art Museum, Asheville, NC, in 2014 and traveled to the Butler Institute in Youngstown, OH, in 2015. In 2014, the documentary film, Visions of Mary Frank, was produced and released by filmmaker John Cohen. In 2000, the Neuberger Museum in Purchase, NY presented a major traveling retrospective of the artist’s paintings, Encounters, which was accompanied by a book with text by Linda Nochlin, and published by Abrams. Hayden Herrera was the author of a major survey of Mary’s career that was published in 1990. Shadows of Africa, a collaboration with author Peter Matthiessen, was published by Abrams in 1992.

This exhibition runs concurrently with Charles Burchfield: Solitude. DC Moore Gallery’s next show will feature monumental paintings by Romare Bearden in Abstract Romare Bearden, which will be on view from February 13 – March 28, 2020. 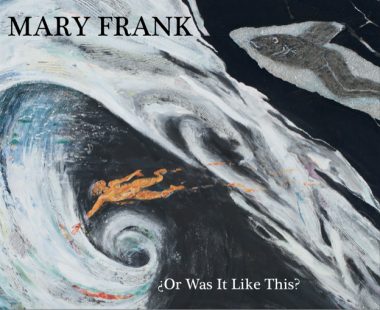