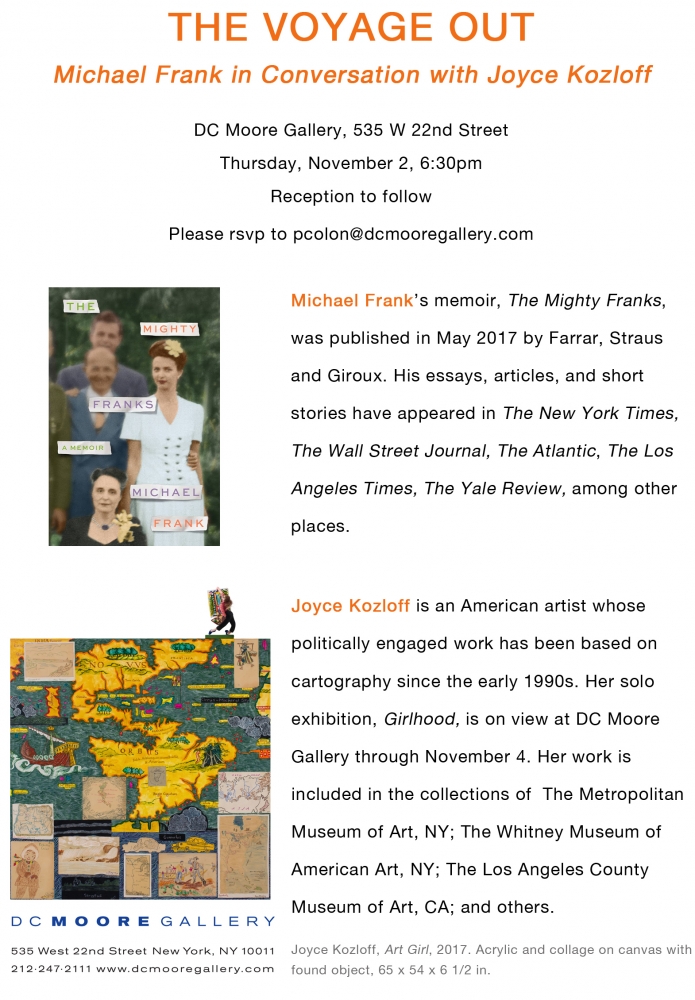 Michael Frank’s memoir, The Mighty Franks, was published in May by Farrar, Straus and Giroux.  His essays, articles, and short stories have appeared in The New York Times, The Wall Street Journal, The Atlantic, Slate, The Yale Review, Salmagundi, and Tablet, among other publications.  His fiction has been presented at Symphony Space’s Selected Shorts: A Celebration of the Short Story, and his travel writing has been collected in Italy: The Best Travel Writing from The New York Times.  He served as a Contributing Writer to the Los Angeles Times Book Review for nearly ten years.  He lives with his family in New York City and Liguria, Italy.

Joyce Kozloff has been an activist in the feminist art movement since 1970. She was a pioneer of the Pattern and Decoration movement of the 1970’s and 80’s and a founding member of the feminist collective Heresies. After a sustained commitment to public art throughout the 1980s and 1990s, she returned to a studio practice that encompasses painting, sculpture, installations, printmaking, and photography. In 2016 Kozloff was commissioned to create a print, Waves II, to commemorate the opening of the Met Breuer. Kozloff is currently working on a commission for the MTA Arts & Design Program. Kozloff’s work is included in public collections such as the Brooklyn Museum of Art, NY; Los Angeles County Museum of Art, CA; Metropolitan Museum of Art, NY; Museum of Modern Art, NY; National Gallery of Art, Washington, D.C.; and Whitney Museum of American Art, NY.