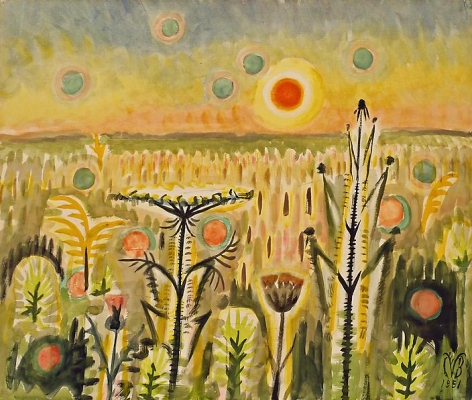 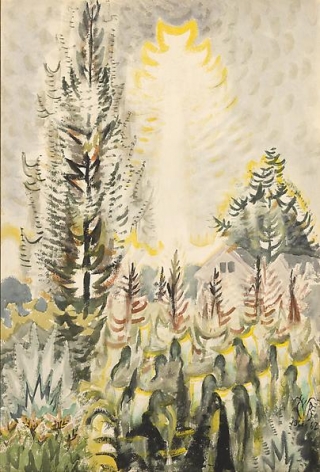 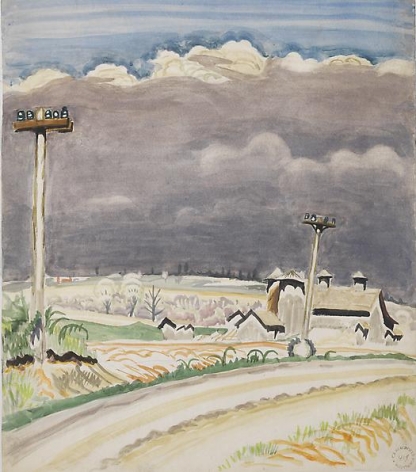 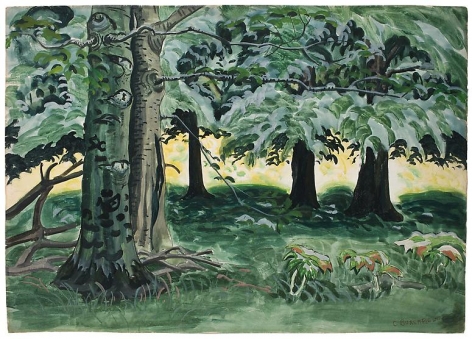 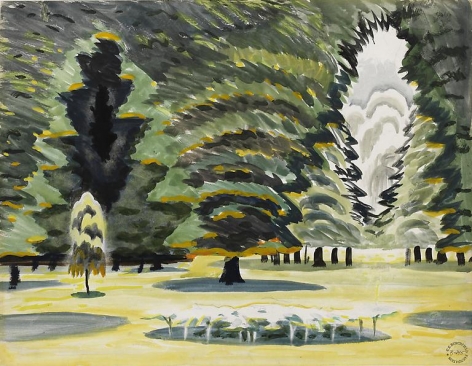 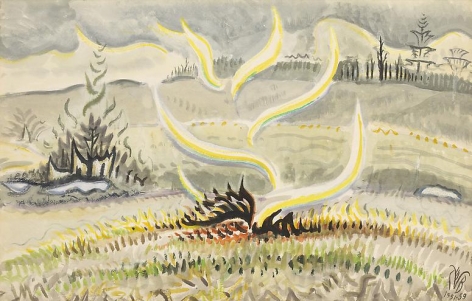 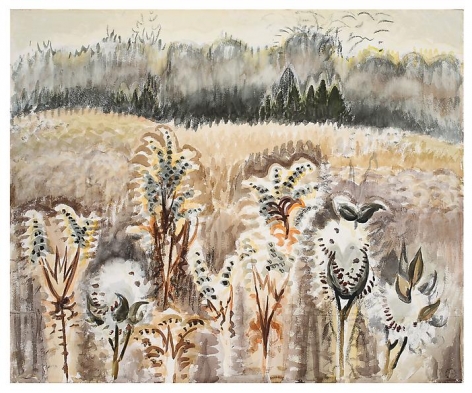 One of the most original artists of the twentieth century, Charles Burchfield (1893-1967) created highly personal works that project an atmospheric intensity and a strong sense of mood. Throughout his life, he found evidence of the divine in the natural world and frequently imbued his paintings with a sense of otherworldly presence. This focused exhibition in our West Gallery presents a prime selection of watercolors that spans his fifty-year career.

Among his earliest paintings are modernist views of his hometown of Salem, Ohio and the surrounding countryside. While a student at the Cleveland School of Art from 1912-16, Burchfield was introduced to major trends in European and American modernism, Chinese and Japanese art, and contemporary design theory. His work at the time often evidenced an interest in imaginative, expressionist landscapes and a personal visual language of fantasy. In Sunlight in Park (1917), he approached abstraction through the bold optical effects of a burst of sunlight that creates dense, colorful patterning on a screen of trees while also illuminating the ground below.

After moving to Buffalo, New York, in 1921, Burchfield engaged a deeper concern with realism and became a founder of the American Scene painting movement. Much of his work addressed the harsh realities of twentieth-century industrialization and life in small towns and urban areas. At the same time, he strived for compositions that were almost classical in form and often poetic in feeling. He once wrote that he preferred to be known as a “romantic-realist,” adding, “It is the romantic side of the real world that I portray. My things are poems—(I hope).”

In the early 1940s, Burchfield returned to a more active expressionism. Swirling skies, anthropomorphic forms, visual notations of insect sounds, and heavily outlined trees radiating a visible energy are some of the elements that characterize his watercolors from the decades that followed. He also focused on what he knew best—the landscape around his home in upstate New York. In Brown Land (c. 1962-63), he turned his attention to one of his favorite subjects, an intimate view of a field, a close up of a cluster of plants set against a backdrop of schematic trees at a time of seasonal transition.

In both his life and art, Burchfield saw the universal in the particular, and nothing was too small or insignificant to capture his attention. He felt strongly that his identity as an artist was bound up with his relation to nature. “I feel impelled to embrace the earth,” he wrote in his journals. On another day spent in the fields and woods, he found that his “spirit was in complete harmony with the world of nature and absorbed every sight and sound with a completeness that has not been my lot for many a month.”DC Moore Gallery is the exclusive representative of The Charles E. Burchfield Foundation.On view concurrently: Janet Fish: Recent PaintingsUpcoming Exhibitions:Robert De Niro, Sr. March 22 – April 28Mark Innerst May 3 – June 8