“In the late 1960s Duane Michals made an influential discovery: the photographic sequence, in which he’d pull a staged narrative out across a series of stills.  Fifty years later, at the age of 83, he’s now made his first video … which in some ways does the opposite: His new medium allows him to pile his images one on top of another.”
- Blake Gopnik

Sequences and Talking Pictures, Duane Michals’ fourth exhibition with DC Moore Gallery, is the first full-scale exhibition to focus on Michals’ recently conceived series of short films or “mini-movies” as Michals refers to them. Michals, who wrote, directed, and at times acted in his dozen film shorts, created this new body of work in the same pioneering spirit that fuels his ongoing discovery of distinctly new ways of considering the medium of photography. Themes central to Michals’ investigations are addressed in each film, which consistently maintain his ever-evolving study of the essential aspects of being human.

Steeped in cinematic history Michals draws inspiration from a sophisticated range of sources - early stars of the silver screen such as Charlie Chaplin as well as esoteric French illusionists like Georges Méliès.  Parallels can be seen between Michals’ movies and those of experimental, underground filmmakers like Kenneth Anger, whose work, as Michals’, openly addresses the subject of homosexuality.  Michals’ films revisit, reexamine and reinterpret topics that have preoccupied the artist throughout his career, specifically issues of identity, love, and loss.

In Are You Still A Faggot Michals plays a grandfather struggling to understand his grandson’s sexual identity. The film records the tension that builds as a consequence of their conflicting emotions. Their dialogue has a brutal tempo, a staccato that mirrors the characters’ own discomfort.  As in his still photographs Michals deftly orchestrates the effects of multiple exposure using the technique to convey the complexity and emotional resonance of a charged situation. The actors’ words imply one thing, while beneath their dialogue exists an empathy they are unable to articulate.

Another film, The Sorcerer Invents the Universe pays homage to painting heroes such as René Magritte, Balthus and Giorgio de Chirico.  In this whimsical featurette, Michals takes the audience along on a surrealistic romp through a fantasy of the creation of the universe, aptly set to the score of Erik Satie’s Parade.

In the black and white montage Cockadoodledoo, dedicated to French playwright Jean Cocteau, the filmmaker strikes a more serious note bringing to life four earlier black and white sequences, The Blue Sequence, Take One and See Mount Fujiyama, Jeannie and Watching George Drink a Cup of Coffee, also on view in the exhibition. In the first take of the movie, The Blue Sequence, a dark vaudevillian humor pervades the story of a brief homosexual tryst gone awry.

Also on view in the galleries are early formative sequences dating from the late 1960s and 1970s, some which specifically inspired Michals’ new screenplays and cinematic compositions. A third body of work, a series of never before seen, color, chromogenic ‘posters', advertise each movie with titles, credits and lists of actors, written in Michals’ elegant script.

In 2014 the Carnegie Museum of Art organized a major retrospective, Storyteller: The Photographs of Duane Michals, which traveled to the Peabody Essex Museum in Salem, MA.  A fully illustrated monograph accompanied the retrospective, published by Prestel with essays by Linda-Benedict Jones, Allen Ellenzweig, Marah Gubar, Max Kozloff and Aaron Schuman. Additionally, in 2014 Monticelli Press published ABC Duane: A Duane Michals Primer, singled out as a TIME best Photobook of the year 2014. 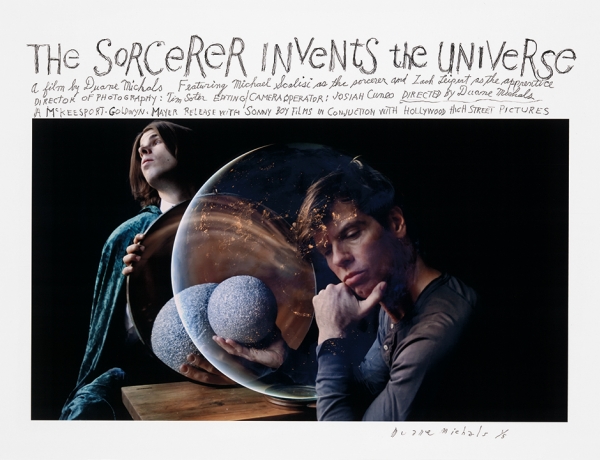