See No Evil, Speak No Evil, Etc.. (Homage to Kunisada) Version #3, 1985
Crayons on tracing paper over gray acid free board 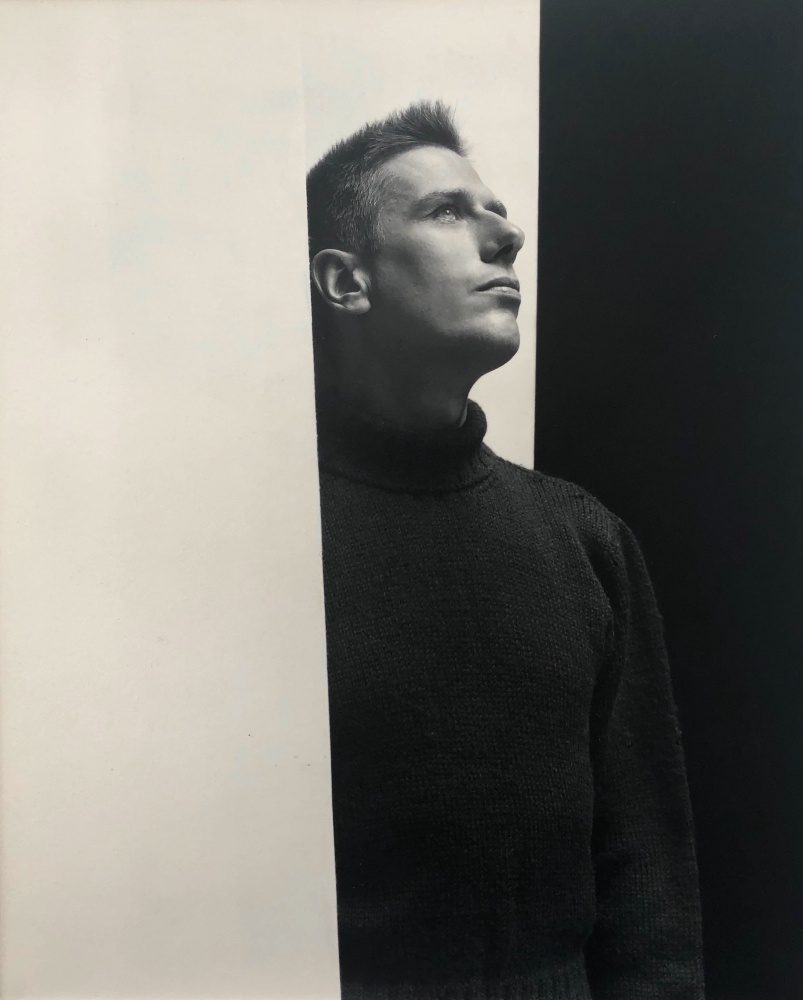 Paul Cadmus was born in New York City on December 17, 1904. His father Egbert Cadmus was a commercial lithographer and watercolorist who had studied under the painter Robert Henri, and his mother Maria Latasa was an illustrator of children’s books. The two met in art school and encouraged the early artistic inclinations of their children, Paul and Fidelma.

In 1919, at the age of 15, Cadmus left high school and entered the National Academy of Design, studying first under Charles Hinton. Cadmus learned to draw from plaster casts in preparation for the living model and two years later he was admitted to the life drawing class. He received a bronze medal from the Academy the following year for excellence in the discipline. He began to study printmaking under William Auerbach-Levy in 1923, and soon after began exhibiting his work and publishing illustrations for the weekly book review section of The New York Herald-Tribune. By 1926 Cadmus completed his course work at the Academy, having won numerous scholarships and prizes for excellence.

From 1928 to 1931 Cadmus was employed as a layout artist at a New York advertising agency. He continued taking sketch classes, studying with Joseph Pennell and Charles Locke at the Art Students League. It was here that he met fellow student Jared French who was to become perhaps the single most important influence on Cadmus’s life and work. It was French who encouraged Cadmus to abandon commercial work and pursue a career as a fine artist. Several years after meeting, the two decided to travel to Europe in search of a more stimulating environment where they could live inexpensively and paint.

In October of 1931 Cadmus and French departed aboard an oil tanker bound for France. They traveled first to Paris, then purchased bicycles in Chartres and toured cities and museums throughout France and Spain. With Ibiza or Mallorca in mind, the two headed south, eventually settling for an extended period in the Mallorcan fishing village of Puerto de Andraitx. Cadmus was prolific during the stay in Mallorca, painting a number of what are considered his first major early works: YMCA Locker Room, Shore Leave, Self Portrait: Mallorca, Mallorcan Fishermen, and others. Cadmus and French resumed touring on the continent in 1932, and saw the principal cities, artistic sites, and museums of Germany, Austria, and Italy before returning to Mallorca.

In 1933, Cadmus’s sister Fidelma sent him newspaper clippings on the newly organized, government-sponsored Public Works of Art Project. With their passports about to expire and their money almost spent, Cadmus and French returned to America in October of that year. Cadmus was accepted into the PWAP in December as one of the program’s first participants, and in 1934 his painting The Fleet’s In! was shown in an exhibition of PWAP art in New York organized by the newly founded Whitney Museum of American Art. When the exhibition traveled to the Corcoran Gallery in Washington, D.C. the painting was ejected from the show, precipitating a scandal that catapulted the young artist to national notoriety.

Controversy followed Cadmus throughout this period. When Coney Island was exhibited in 1935 at the Whitney Museum, the satirical panorama caused neighborhood realtors to threaten a civil suit. In 1936 Cadmus was commissioned by the Treasury Relief Art Project to execute murals for the Port Washington, Long Island post office, and he chose a series satirizing Aspects of Suburban Life for his subject. There were considerable objections to his sardonic treatment of subjects such as Commuter Rush, Main Street, Polo Spill, and Golf, and the full-size murals were never painted. The Project did commission him to paint the series as half-size easel pictures. Three of these works are now in the collection of the Smithsonian Institution’s National Museum of American Art in Washington, D.C.

Cadmus’s first one-man show was held at Midtown Galleries in New York in 1937. The exhibition attracted more than 7,000 viewers, many of whom were eager to see for themselves these controversial works that had received such extensive newspaper and magazine coverage and caused such unprecedented public outcries.

The Treasury Section of Painting and Sculpture commissioned Cadmus to paint a large mural for the Parcel Post building in Richmond, Virginia in 1938. His subject was Pocahontas and Captain John Smith and his models included his sister Fidelma along with her future husband Lincoln Kirstein. The treasury officials objected to a loincloth of fox fur they considered suggestive and asked that the mural be retouched. Around this time Cadmus designed the scenery and costumes for “Filling Station,” a ballet with music by Virgil Thomson and choreographed by Lew Christiansen for Lincoln Kirstein’s company, Ballet Caravan.

At the 1939 Whitney Annual Cadmus’ painting Seeing the New Year In, a picture based on the artist’s experiences at Greenwich Village parties, caused friction because of its recognizable portraits. In 1940 Life commissioned Cadmus to paint one panel of a historical series documenting the labor movement in the United States. At the last minute the magazine refused to publish the painting, The Herrin Massacre, because its controversial depiction of workers killing scab laborers made them fearful of offending organized labor. Still another national scandal was triggered by Sailors and Floosies, which was at first removed, and then rehung, at the Golden Gate International Exhibition in San Francisco.

Cadmus was introduced to the early Renaissance medium of egg yolk tempera by Jared French in 1940. Cadmus and French now shared a studio in Greenwich Village, and both artists made important advances in their work around this time. The egg tempera technique dictated smaller, jewel-like paintings, and Cadmus temporarily retreated from controversial subjects with a series of Fire Island beach scenes and a second series depicting dancers in studios.

Along with Jared French and his wife Margaret, Cadmus spent the summers of this period at the Fire Island town of Saltaire. For relaxation and amusement after a day’s painting, the three took many carefully posed photographs that were later termed PaJaMa -- after the first two letters from each of their first names. These photographs were originally taken by the three artists for themselves and their friends only, but were re-discovered and shown publicly during the 1970s. The photographs were published in Twelvetrees Press’s 1992 book Collaboration and were exhibited at the University of Iowa Museum of Art in 1994.

Cadmus’s first important museum exhibition was “Three American Painters,” mounted in Baltimore in 1942. The following year sixteen of the artist’s works were included in the seminal exhibition “American Realists and Magic Realists” at the Museum of Modern Art, curated by Lincoln Kirstein.

Along with French, Cadmus encouraged the young painter George Tooker, whom the two had met at the Art Students League in 1944, to work in the egg tempera medium as they practiced it -- Tooker had previously learned Reginald Marsh’s egg tempera technique. In the mid-1940s Cadmus continued to paint his Fire Island scenes, and also began a series of panels depicting The Seven Deadly Sins. These works were shown in 1949 at Cadmus’s third one-man exhibition at Midtown Galleries. The series is now in the collection of the Metropolitan Museum of Art in New York, and the museum mounted a solo exhibition of Cadmus’s work in 1995 which featured the “Sins” along with other works from their collection.

In 1943 Cadmus had discovered the writings of E. M. Forster and, finding the author’s ideas inspirational, began a long-term correspondence with the author. During Forster’s first visit to the United States in 1947, Cadmus served as a co-host. The painter interrupted work on the “Sins” to paint his visualization of the writer’s credo What I Believe. Forster stayed at the Greenwich Village studio, and also visited with Cadmus and Jared and Margaret French, who were in Provincetown. In turn, Cadmus visited Forster in Cambridge in 1949 and drew a portrait of the author.

In 1950 several of Cadmus’s works were included in “American Symbolic Realism” at London’s Institute of Contemporary Art, and Architect was exhibited at the Whitney Annual. In the years 1951 to 1953 Cadmus lived and worked in France and Italy. Bar Italia (1955) documented the American tourist invasion of postwar Italy against a background that was an architectural synthesis of several Italian cities. Night in Bologna (1958), a large egg tempera panel, was immediately recognized as a masterpiece. Both works are now in the collection of the National Museum of American Art in Washington.

Cadmus moved from Manhattan to a studio on Remsen Street in Brooklyn Heights in 1961. That same year he received a grant from the National Institute of Arts and Letters. In 1965 he began work on a series of highly developed drawings of the male nude for which Jon Anderson is the principal model. The large sheets of paper are often hand-toned, and the rendering is sensuous and deliberate. Cadmus continues to work on this series today.

A monograph with a catalogue of Cadmus’s prints and drawings was published by the Brooklyn Museum in 1968. In 1969, a few months before E. M. Forster’s death, Cadmus and Jon Anderson journeyed to England to visit the novelist in Cambridge. Cadmus was elected to the American Academy and Institute of Arts and Letters in 1974. The following year he moved from Brooklyn to a house and studio in Weston, Connecticut. Subway Symphony, his largest painting, was completed in 1976. In 1980 Cadmus visited Margaret and Jared French, who had settled in Rome.

Cadmus was the subject of a major retrospective exhibition initiated by Miami University of Art in Ohio in 1981, which traveled to four other U. S. museums. In 1982 Cadmus returned to Europe to visit friends and view paintings in London, Paris, and Holland. The first edition of Paul Cadmus by Lincoln Kirstein was published in 1984, and Paul Cadmus: Enfant Terrible at 80, a documentary film by David Sutherland, was also produced that year. In the film Cadmus serves as both subject and narrator, discussing his life and work and demonstrating his egg tempera technique. The film won over twenty national and international awards. In 1989 Rizzoli published a monograph titled The Drawings of Paul Cadmus with an introduction by Guy Davenport.

Cadmus’s work was exhibited with that of his friends George Tooker and the late Jared French in two 1990 exhibitions: “Close Encounters: The Art of Paul Cadmus, Jared French, and George Tooker” at Midtown Galleries, and “Cadmus, French, and Tooker: The Early Years” at the Whitney Museum branch at Philip Morris. Both exhibitions concentrated on the interrelationship of the three artists and the influence they had on each other’s work.

Recent solo exhibitions of Cadmus’s work include: “The Fleet’s In! Paintings by Paul Cadmus,” which was on view at the National Museum of American Art in 1992 and traveled to other major American museums; a 1994 exhibition at the National Academy Museum in New York celebrating Paul’s 90th birthday; “The Seven Deadly Sins and Other Works from the Permanent Collection,” held at the Metropolitan Museum of Art in 1995; “Paul Cadmus: The Sailor Trilogy,” featuring the 1930s works The Fleet’s In!, Shore Leave, and Sailors and Floosies, at the Whitney Museum of American Art in 1996; the exhibition “Chuck Close/Paul Cadmus: In Dialogue” at the Philadelphia Museum of Art in 1997; and “Paul Cadmus: 90 Years of Drawings”, a 1998 retrospective exhibition of drawings at DC Moore Gallery. The hardcover monograph “Paul Cadmus: The Male Nude” was released by Rizzoli/Universe in the fall of 2002. The book coincided with an exhibition of the same name at DC Moore Gallery. 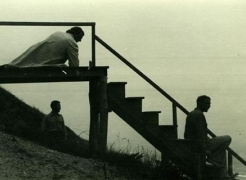 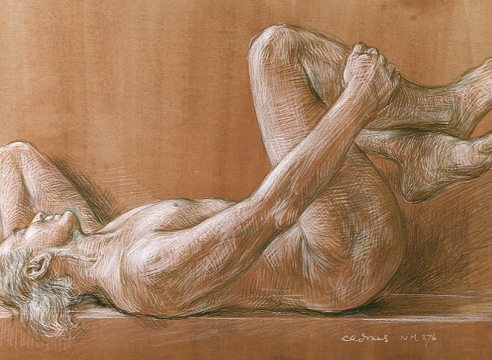 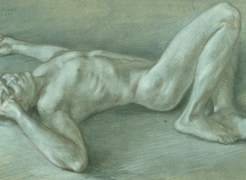 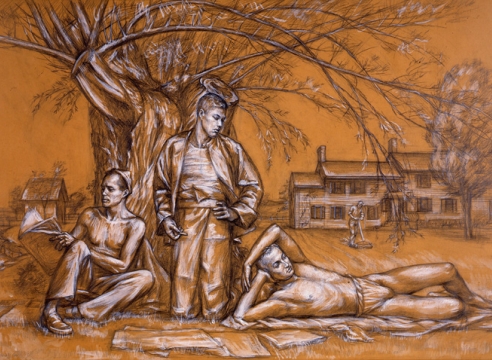 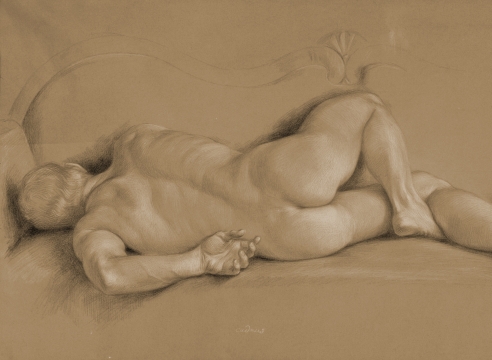 Paul Cadmus: 90 Years of Drawing
Back To Top