Debra Bermingham was born in Northampton, Massachusetts in 1953. She has a BFA from the University of Washington, Seattle, Washington and an MFA from Cornell University, Ithaca, New York.

Bermingham has been the recipient of various awards including The Ballinglen Arts Foundation Fellowship, Ballycastle, County Mayo, Republic of Ireland (2000); The Constance Saltonsall Foundation for the Arts Grant (1997) and the Louise Nevelson Award in Art from the American Academy of Arts and Letters (1996), among others. She has taught at universities in Washington State and New York, most recently as an Assistant Professor at Cornell.

Bermingham’s works are included in public collections including The Art Institute of Chicago, The Brooklyn Museum of Art, and Smith College Museum of Art. 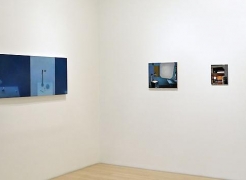